UKPHA is recognised as a leading heritage charity, interested in Punjab's arts, literature, history and traditions. The organisation's roots lie in the personal journeys of its founding members who set out to discover and make sense of their cultural inheritance.

A PRICELESS BUT AT-RISK HERITAGE

The world's national collections, provincial museums, academic institutions, private collections and libraries around the UK and across the Indian subcontinent possess a wealth of material relating to the rich and fascinating heritage of Punjab. Including beautifully created manuscripts, paintings and drawings, exquisite examples of arms and armour and evocative Victorian photography of people and buildings.

There is no dearth of this rich material heritage and most of it remains largely undiscovered and unappreciated. There is a lack of awareness even within the holding institutions and a definite lack of clear signposting. Worryingly, this rich cultural inheritance is undervalued and in some cases, dangerously at risk.

In 2001 we formally constituted UKPHA as a voluntary association to preserve and present an important cultural legacy to modern audiences. Since then UKPHA has grown in both reputation and reach. A core team of dedicated and passionate volunteers helps deliver engaging projects working alongside major heritage sector partners, community groups and heritage experts. 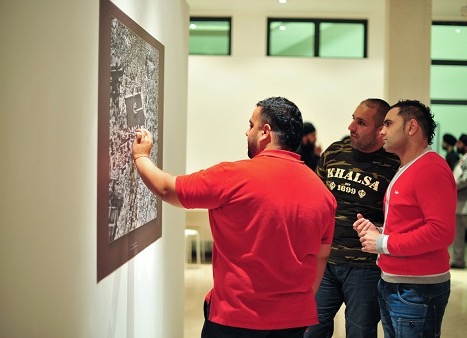 UKPHA has worked with a range of partners to create innovative projects (see the track record). These include websites,
exhibitions, lecture series, TV & radio programs, books and online events.

We are best known for three major London exhibitions, sponsoring new publications and a zoom based bookclub.

Collaboration is fundamental to achieving our aims. New possibilities, new experiences and new connections come from working with other experts and passionate individuals globally, both within and without the Sikh and Punjabi community.This approach has enabled a diverse range of people of all ages, backgrounds and levels of knowledge to connect to a wealth of engaging content, increasing access to heritage through building new audiences who might otherwise have been reluctant to engage with the subject.

Much of UKPHA's past success comes from its relationships with national and international heritage partners and other community groups. We continually seek equitable partnerships to generate new opportunities, real benefits and synergies that will enhance awareness and enjoyment of our rich cultural inheritance.

As a community-based organisation with no permanent staff, we rely on a core group of dedicated volunteers to plan and deliver projects.

Our volunteers include designers, writers, historians, researchers, film makers, photographers, students, accountants, lawyers and entrepreneurs. Some of our volunteers make up with passion what they lack in expertise these include young people, parents and older citizen historians from across the community.

Volunteering offers an opportunity for individuals of all ages and backgrounds to actively learn about our heritage. It is also an avenue for acquiring new skills and experiences that can assist with future employment or training opportunities.

If you are aged 18 years and over and would like to get involved in our work on a project-by-project basis, contact us.

UKPHA is an unincorporated association registered as a charity with HMRC (no. 1152752). The work of UKPHA is overseen by a Management Board made up of volunteers who either have extensiveindustry experience in running large-scale projects or are from professional backgrounds. This core team is assisted with oversight and advisory functions throughout a project’s development,implementation and evaluation phases by a wider grouping of senior level professionals with relevant skills,ranging from legal, accounting, management and IT through to charity sector, fundraising and PR. In addition,UKPHA consults with heritage sector professionals and institutions on an ongoing basis. In terms of governance, UKPHAs management committee meets every 3 months, as well as holding an annualgeneral meeting in line with the rules laid down in its constitution. Sub-committees are often set up to deal withdifferent aspects of its activities, as well as steering groups and youth panels to manage larger individual projects.

MEET SOME OF UKPHA'S CORE TEAM:

Amandeep is a founding member of UKPHA and chairs its Management Board. He has co-authored several major books on Sikh history including Warrior Saints: Three Centuries of Sikh Military Tradition (IB Tauris, 1999), “Sicques, Tigers, or Thieves”: Eyewitness Accounts of the Sikhs (1606-1809) (Palgrave Macmillan, 2004), The Golden Temple of Amritsar: Reflections of the Past (1808-1959) (Kashi House, 2011). He was awarded an OBE in the 2018 Queen's Birthday Honours List for services to Sikh and Punjabi Heritage and Culture.

Parmjit is a founding member of UKPHA and provides vital oversight and advisory capability across all of our projects. He qualified as a chartered accountant but put his career on hold to pursue a path of research, writing and publishing on Sikh history via the social enterprise publisher, Kashi House. He has lead on the design, development and delivery of all of UKPHA's major projects. These include the hugely popular exhibition The Golden Temple of Amritsar: Reflections of the Past, held at the Brunei Gallery, SOAS, London in 2011 and the influential 2014-2017 Empire, Faith & War project that commemorated the Sikh role in the First World War.

Navinder is a partner in an established City law firm with 15 years experience in commercial litigation and insolvency. He served as president of the Young Panjabis professionals group in the 1990s, driving forward much of their charitable work. As a volunteer, he has represented Death Row prisoners in South Carolina, USA. Navinder is responsible for liaising with existing and potential donors in order to raise awareness of UKPHAs work both in the UK and abroad, primarily in the USA. He also provides ad hoc legal advice to UKPHAs Management Board.

Harbakhsh has extensive experience in politics and public affairs, having spent over a decade working in Westminster, firstly for a Member of Parliament and later as a political consultant in both in-house and agency roles. His passion for Sikh and Punjabi history led him to volunteer with UKPHA where he is responsible for much of our public relations and communications work including media, social media, stakeholder relations as well as some of our learning and outreach work.

Bikram is a PhD in Social Psychology where his research focused on British-Sikh identity. After volunteering with UKPHA, his broader interests in Sikh and Punjabi culture, history and heritage developed. His considerable experience across the research spectrum means he is responsible for various forms of data collection and analysis.