When Nusrat came to Slough

Virinder Kalra joins the Bookclub in conversation with Pritpal Singh to explore the ways in which Nusrat’s Qawaali engaged with other spiritual music texts.

Virinder Kalra is Professor of Sociology at the University of Warwick and specialises in several areas including racism and ethnicity in relation to popular culture and policy. He has published numerous books and academic articles including 'Sacred and Secular music: A postcolonial approach'. Having grown up in Bradford, and being raised within the Sikh scholarly ‘Nirmala’ tradition, Pritpal Singh spent a number of years advising U.K. academic institutions on Sikh sociology-religious issues. Currently residing in the Middle East, Pritpal has contributed to a number of projects to revive Sikh musical traditions.
Nusrat Fateh Ali Khan was undoubtedly one of the most popular Qawaali singers of South-Asia and thus in 1989, Nusrat performed at Slough Gurdwara singing texts from the Sikh tradition. Virinder Kalra joins the Bookclub in conversation with Pritpal Singh to explore the ways in which Nusrat’s Qawaali engaged with other spiritual music texts. He will look at how the space of diaspora enabled interactions across religious boundaries and created the conditions to re-imagine a nineteenth century Punjab in which the role of musicians was not delimited by their religious identities.
Buy ‘Sacred and Secular Musics: A Postcolonial Approach’ here >> 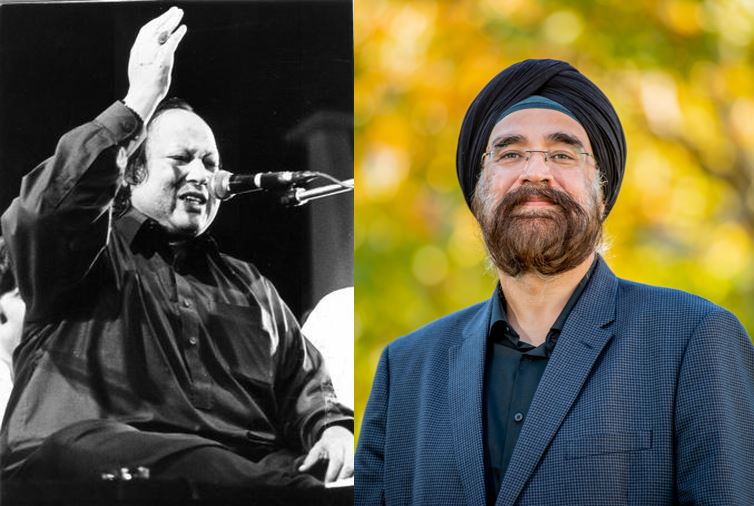